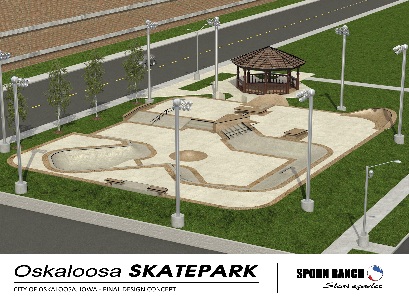 The City of Oskaloosa is pleased to continue its partnership with the Mahaska Community Recreation Foundation (MCRF) and provide diverse and world-class recreation opportunities to the residents of Oskaloosa. The skate and bike park, otherwise known as the Urban Park, is located on city-owned property that is leased to MCRF, who operates and maintains the facility.

As the centerpiece of Oskaloosa's Urban Park, the designers envisioned the skatepark as a vibrant and colorful space that could be proudly displayed as a community showpiece. Working through the MCRF, designers Spohn Ranch also facilitated thoughtful community involvement by engaging with local skateboarders and BMX bike riders on the park's design.

While the majority of Iowa's skateparks feature metal ramps on old tennis courts or large expanses of dull concrete, Oskaloosa's action sports space stands alone. With an innovative sculptural quality and a diversity of aesthetic enhancements, the resulting design is arguably the most progressive skatepark in the State of Iowa. Often resembling more of an urban plaza than a traditional skatepark, the park features a dynamic colored concrete pattern, integrated granite collages and a host of cantilevered obstacles that double as architectural focal points.

Brought to fruition with donations from local businesses, youth fundraising and a grant from the Tony Hawk Foundation, this contemporary park also boasts a state-of-the-art lighting system, spectator seating and an aesthetically-inviting landscape design.